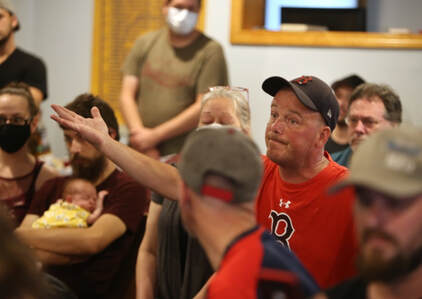 Jason Neal of Ayer, a 15-year resident of the Devenscrest housing complex, makes a point during an informational meeting led by State Sen. Jamie Eldridge, hosted by Stone Soup Kitchen Ministries, about the notices to vacate that some residents have received. SUN/Julia Malakie
Devenscrest is an 11-acre complex consisting of 110 apartments in 33 buildings in Ayer. It is occupied by many working-class families, a number of people with disabilities, and approximately 200 children. Many of the tenants have resided at Devenscrest for over decades. Owned by the same family for over 50 years, rents had been kept low. Devenscrest was purchased for $11 million in cash in June 2021 by two New Hampshire-based developers who have been operating in the Commonwealth for the past two decades. The two individuals are managers and directors of over 50 separate MA LLCs and corporations.

Less than a month after the purchase, the new owners issued Notices to Quit to one third of Devenscrest households. They said they intend to renovate the housing and offer the units for rents at about double the current rents. The tenants quickly formed a tenant association and brought in the regional legal service agency to fight the pending evictions. Nevertheless, about one third of the families moved out within two months of the new owners’ demand that they vacate. Most of Devenscrest tenants do not want to leave and cannot leave; there simply are not anywhere near 100 vacant rental units elsewhere in Ayer and adjoining towns. The Tenant Association would like a nonprofit developer to buy the property and maintain it as low- and moderate-income housing, but that cannot happen unless the new owners agree to sell. 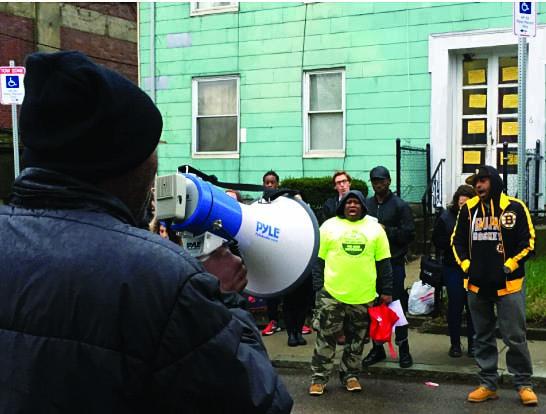 6 Humphreys Place,  a 6-family building in the heart of Upham’s Corner in Dorchester that has been in disrepair for years, has become a symbol of community pushing back against gentrification.  The property has flipped between owners in the past few years, driving up the price, and threatening to push out the residents from the building. After a 4-year struggle, the tenants working with City Life/Vida Urban and Harvard Legal Aid Bureau have staved off eviction through rallies and actions, leading to a collective bargain agreement. On December 23, 2021 the Boston Neighborhood Community Land Trust acquired 6 Humphreys Place. The purchase of this property by BNCLT now guarantees that the building will be permanently affordable, in the control of the community, and entirely out of reach from unforgiving market forces. If TOPA had been in place, the tenants would have had an easier pathway to achieve stable, affordable housing. This story also demonstrates the type of partnership between organized tenants and community land trusts that TOPA will help enable on a larger scale.
TOPAcoalition@mlri.org